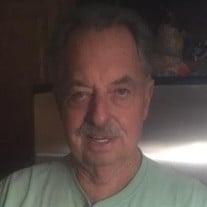 Victor "Vick" Hudson passed away on May 8, 2022 at the age of 75 at North MS Medical Center in Tupelo, MS. He was born January 8, 1947 to Troy Hudson and Mildred Bain Hudson in Benton County, MS. He worked as a Self Employed Carpenter and Painter... View Obituary & Service Information

The family of Victor "Vick" Hudson created this Life Tributes page to make it easy to share your memories.

Send flowers to the Hudson family.