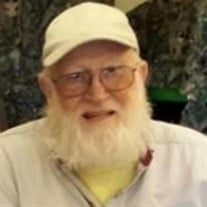 Troy David Brown passed away on February 8, 2022 at Cornerstone in Corinth, MS. He was born December 24, 1942 to Andrew Brown and Jettie Proctor Brown in Walnut, MS. He was affiliated with the Baptist faith, was a 1961 graduate of Walnut High... View Obituary & Service Information

The family of Troy David Brown created this Life Tributes page to make it easy to share your memories.

Troy David Brown passed away on February 8, 2022 at Cornerstone...

Send flowers to the Brown family.