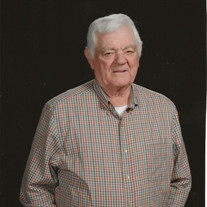 On October 8, 2019, our angels came to get Thomas Granville Grisham. He had been battling Alzheimer's for five years, but had a peaceful death surrounded by his loving family. Thomas was a gentle soul that loved people. He loved kids so much. In his younger years, he liked to hunt with his dad and brothers. Thomas loved to play basketball at Buena Vista School Thomas was an exceptional basketball player he and his teammates played in the state tournament playing for there beloved Coach Slim Hellums. In his later years, he enjoyed going to Tippah County Baseball games. Thomas was a retired employee of Pep-Industries and a member of First Baptist Church in Ripley. Thomas was born on July 27, 1938, to the late Joffree and Genevia Elder Grisham. He was married to the love of his life, Martha Ann Carter Grisham for many years. They had one child, Lori Grisham Robertson and her husband, the late Terry Ray Robertson. Thomas had one very loved grandson, Carter Ray and his wife Chelsea Robertson; three brothers: Bobby Grisham (Blanche) of Blue Mountain, MS, the late Danny Grisham and his wife, Evelyn Grisham of Blue Mountain, and Ronnie Grisham (Martha) of Blue Mountain, MS; three sisters; Patty Childers (Dwight) of Falkner, MS, Judy McMillin and her husband, the late Danny McMillin of Falkner, MS, Ann Dunnam (Ronnie) of Blue Mountain, MS; he also leaves six nieces and eight nephews that he loved dearly. A celebration of Thomas' life will be held Thursday, October 10, 2019, at 11:00 AM at First Baptist Church with Dr. Patrick Chapman, Dr. Micah Carter and Bro. Austin Hamilton officiating. Burial will follow at Tippah Memorial Gardens in Ripley, MS. Visitation will continue on Thursday morning at 7:30 AM until service time at First Baptist Church in Ripley Mississippi. Pallbearers will be Kenny Grisham, Mike Childers, Barry Childers, Brian McMillin, Kevin McMillin, Allen McMillin, Justin Martindale, Rob Dunnam. Honorary pallbearers will Thomas's Sunday School Class of First Baptist Church. Expressions of sympathy for the Grisham family may be sent to www.mcbridefuneralhome

On October 8, 2019, our angels came to get Thomas Granville Grisham. He had been battling Alzheimer's for five years, but had a peaceful death surrounded by his loving family. Thomas was a gentle soul that loved people. He loved kids so much.... View Obituary & Service Information

The family of Thomas Granville Grisham created this Life Tributes page to make it easy to share your memories.

Send flowers to the Grisham family.