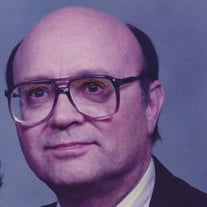 Ripley, MS - Terry Claude Rutherford died on Thursday Morning, December 31, 2020, at 80 years old. This day also marks 15 years to the day of when his wife, Ellen Lucille Rutherford my mother passed. Terry Claude Rutherford was born at home of Anna Laura and Claude Rutherford on September 15, 1940. At home, think about that, most here now were surely born in a hospital. He grew up poor on a farm with two sisters that he is survived by: Frances LaMontague and Mary Lou Bryant. He went to school at Keegan in Memphis for electronics, moving there and living with my grandmother's brother, Uncle Roger. He moved to Livingston, TN for his first, Job where he met my mother, my wife's favorite love story she says. This was before the internet and before electronics had taken over some of our major tasks in life. He pressed play on the tape of the very first episode of Sesame Street to air on WKNO Channel 10. Below is memories from the son: My father was a man small in stature, but he was one of the largest and greatest men I ever Knew. I grew to admire & respect him more as I got older, but it surely didn't start out that way for us. Like most teenagers, I was rebellious and at times selfish. He handled me with patience S& care even when I obviously frustrated him. I learned at an early age that even if we had nothing to say to one another we could always talk about wrestling and not have a disagreement. That is something that always continued throughout my life. It was what we watched and talked about the most, even these days. As I got older and realized I would need to work for a living, I wondered what I would do. Over the first few years of me working I started realizing that I had picked upon some of my father's electronics knowledge and skill, School Science Projects and just watching and helping him over the years with Ham Radio's and Television equipment. I grew up watching him fix & use electronics and gadgets. we called my grandparents house on a two way Ham Radio with a telephone keypad in the early 80's before bag phones were even a thing. We bought our first VCR together in the early 80's. My father was an early electronics pioneer. Though the technology would frustratingly pass him by his love for electronics & gadgets was something he desperately always clung to. Order in Chaos that was important lesson that I learned from him. I made a very good career at an early age in the HVAC Industry, because of the things that I have learned from my father. One of the best lessons I ever learned from him was trying to do the right thing, and trying to do that for your family. Also each time big decisions were to be made; weighing consequences and always tying to do the Right Thing, even if its not the right thing for you. That is a life long skill that most of us never master including me. He lived and died like a man, not asking for help even when he probable knew he needed it, even to the end. He was always there for me for 51 years every time I needed him. He taught me to be a man of science as well as a man of God. My father fought his whole life. Sometimes against insurmountable odds; Glaucoma at 19, Diabetes at 35, loss of a father, death of a spouse, you name it, if he couldn't defeat it - he could certainly learn to manage it - Almost Anything. He called without fail Wednesdays at 6:00 PM and we would talk for at least an hour every week. I always dropped what I was doing and spent that hour with him on the phone each week, talking wrestling, news and keeping each other updated on family and friends. I think this is going to hit me the hardest when this Wednesday at 6:00 PM rolls around and he doesn't call. Condolences for the Rutherford family may be left at www.mcbridefuneralhome.com

The family of Terry Claude Rutherford created this Life Tributes page to make it easy to share your memories.

Send flowers to the Rutherford family.