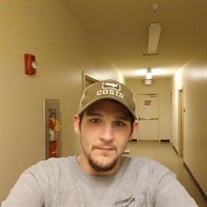 Ashland, MS - Stephen Earl Daniel, 26, passed away Wednesday, April 22, 2020, as a result of an Automobile Accident. He was born on July 30, 1993, to Donald Eugene and Candi Miller Daniel in New Albany, MS. He was a self- employed carpenter... View Obituary & Service Information

The family of Stephen Earl Daniel created this Life Tributes page to make it easy to share your memories.

Send flowers to the Daniel family.