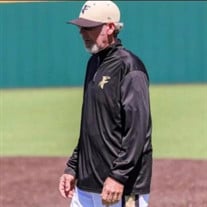 Stanley Ray Horton, Jr. was born September 4, 1971 to Stanley Ray Horton, Sr. and Cathy Lanning Barnes in Booneville, Mississippi. He was married to "B.J." Braddock Horton. He was a technician for Caterpillar in Corinth, MS for 20 years. He was a baseball coach at Falkner High School. He also coached his son and numerous other young kids that he called the "perfect game". This was his opportunity to live out his dream of being a baseball coach. Stan played baseball at Corinth High School and at Delta State University. Stanley was survived by his father: Stanley Ray Horton, Sr. (Janie) of Corinth, MS; his wife: "B.J." Braddock Horton of Ripley, MS; one son: Stanley Ray Horton, III of Ripley, MS; one daughter: Hannah Leone Horton of Ripley, MS; two brothers: Kevin Horton (Ashlee) of Augusta, GA, Mark Horton (Stephanie) of Corinth, MS; one aunt: Cindy Dickey (Larry) of Corinth, MS; mother-in-law: Connie Braddock of Ripley, MS; one brother-in-law: Dan Braddock (Melinda) Germantown, TN; nieces and nephews. He was preceded in death by his mother: Cathy Lanning Barnes; father-in-law: Danny Braddock. Stanley went home to be with the Lord at the age of 49 on May 31, 2021 at Lake Mohawk. His visitation will be June 3 at Ripley Presbyterian Church from 5:00 p.m.-8:00 p.m. The service will be at the Ripley Presbyterian Church on June 4, 2021 at 11:00 a.m. Interment will be at the Walnut Creek Cemetery. The pallbearers will be: Sammie Carmichiel, Steven Wooley, Brad Barnes, Jeff Anglin, Terry Harmon, Austin Hopper, Blake Allen, Tim Horton. Honorary Pallbearers will be: Falkner Baseball and Football Players. The family requests that masks be worn at the visitation and the service. Memorials can be sent to Falkner Baseball Program, c/o Falkner High School, 20350 MS-15, Falkner, MS 38629.

Stanley Ray Horton, Jr. was born September 4, 1971 to Stanley Ray Horton, Sr. and Cathy Lanning Barnes in Booneville, Mississippi. He was married to "B.J." Braddock Horton. He was a technician for Caterpillar in Corinth, MS for 20 years. He... View Obituary & Service Information

The family of Stanley Ray Horton Jr. created this Life Tributes page to make it easy to share your memories.

Send flowers to the Horton family.