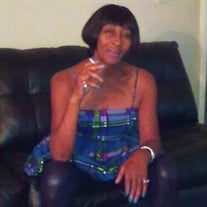 Shirlena Lewis passed away June 16, 2021 at home in Flint, Michigan at the age of 71. She was born October 17, 1949 to Napolean Jones, Sr. and Celia Mae Minor in Marianna, Arkansas. She worked as a CNA Caregiver and attended Wilson Chapel in... View Obituary & Service Information

The family of Shirlena Lewis created this Life Tributes page to make it easy to share your memories.

Send flowers to the Lewis family.