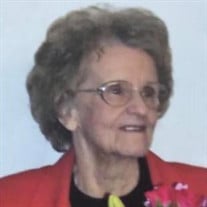 On January 25, 1931 in a humble home located on the Murphy and Sara Cox place, on a rise overlooking Hatchie bottom a baby girl was born to Marvin Randolph (Jake) Anderson and Callie Katherine Cox Anderson. She was affectionately named Sarah Evaleen Anderson. Although she was the only child born to this union while growing up she never felt lonely because she had the love of her parents, grandparents, aunts, uncles and many cousins. She was known as Evaleen by many but in later years preferred to be called Sarah. It was a revival meeting in the Dry Creek community that she met the love of her life William Vance Kuykendall. The romance blossomed and they were married on February 1, 1947. Together the two celebrated a marriage of 68 years until the death of Vance on March 21, 2015. Sarah departed her earthly journey on Saturday, April 24, 2021 and now is safely in the presence of her Savior and all the ones she had been longing to see. She was a member of the Pine Grove Baptist Church and a homemaker. Born to the union of Sarah and Vance were three children: Jerry Kuykendall (Dian) of Tremont, MS, Stan Kuykendall of Pontotoc, MS and Jean Lancaster (James) of Corinth, MS. Sarah leaves behind to cherish her memory her three children, her grandchildren: Beth Blanton (Len) of Tupelo, MS, Kim Koon (Matt) of Pontotoc, MS and Chad Lancaster of Corinth, MS. She also leaves behind three great grandchildren: Mattie Sims Koon, Whittington Vance Koon, and Macy Blanton. Sarah was preceded in death by her husband: Vance Kuykendall, parents: Jake and Callie Anderson, grandparents: Luke and Essie Anderson, Murphy and Sara Cox, her father in law: Madison Kuykendall, mother in law: Nora Ledbetter Kuykendall, and one great grandson: Jacob Koon. Sarah’s final years were spent at Pontotoc Extended Care where she enjoyed telling the staff, residents and visitors (honey you sure look nice today, you are so pretty, I love you honey). She was an avid conversationalist with a contagious laugh. She was truly a gentle southern lady who was dedicated to her family and friends. There will be a void place in the family, but her memory will live on. In lieu of flowers memorials may be made to Boxs Chapel Maintenance Fund, The Peoples Bank, Attention: Paula Windham, P.O. Box 419, Ripley, MS 38663. A public graveside service will be held at Boxs Chapel Cemetery in the Pine Grove community on Monday, April 26 at 5 p.m. with Brother Bill Baker officiating. The family will receive friends beginning at four thirty until service time at the cemetery. Arrangements are entrusted to McBride Funeral Home of Ripley.

On January 25, 1931 in a humble home located on the Murphy and Sara Cox place, on a rise overlooking Hatchie bottom a baby girl was born to Marvin Randolph (Jake) Anderson and Callie Katherine Cox Anderson. She was affectionately named... View Obituary & Service Information

The family of Sarah Evaleen Kuykendall created this Life Tributes page to make it easy to share your memories.

Send flowers to the Kuykendall family.