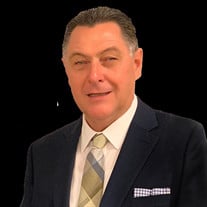 BLUE MOUNTAIN, MS. - Pastor Joseph Franklin McKnight was born January 4th, 1956 to the late Rev. Richard Franklin McKnight and Flora Hicks McKnight. He was also preceded in death by his brother, Jim McKnight. He is survived by his loving wife Roxann Prater McKnight, his brothers Robert, Richard, Ron and Steve McKnight and his sister Glenda Batson. He is also survived by a host of nieces, nephews and other family members. Being raised in a Pastor's home, Bro. McKnight understood the call of self-less service for the Kingdom. When he was only 6 years old, he was baptized and received the Holy Ghost dedicating his life to the work of the Lord. He grew up in the Nashville, TN, area, graduated from high school and later continued his education in Theology and Psychology. At the age of 16, he accepted his call to ministry on Easter Sunday, April 2, 1972. Although he co-owned a business with his brother and became a Licensed Contractor, his true heartbeat was ministry. Pastor McKnight married his wife, Roxann Prater McKnight, June 10, 1977. He was Ordained as a Licensed Minister with the Assemblies of the Lord Jesus Christ in September 1988. Together, Bro. and Sis. McKnight have served their community, family and church family with commitment, passion, and purpose. Throughout his ministry Bro. McKnight served as Pastor at Milledgeville Pentecostal Church, Youth President of the Tennessee District ALJC, and Youth Pastor for The Pentecostal Church of Blue Mountain before becoming Pastor of The Pentecostal Church of Blue Mountain where he served for 27 years. He served on the Board for Iron Hill Christian Academy, as chairman of the board of Blue Mountain Children's Home, New Beginnings International Children's & Family Services Board, Section 1 Presbyter of the Mississippi District ALJC, as the Assistant Superintendent of the Mississippi District ALJC, along with directing worship, preaching, teaching and counseling nationwide. He served as Pastor of The Pentecostal Church of Blue Mountain and Superintendent of the Mississippi District ALJC until his death. Pastor McKnight's passion for ministry was evidenced in his genuine love for souls. His compassion has touched the lives of countless families and individuals. He launched a local Christian Intervention Program, offering support, recovery, and rehabilitation to those in need while sharing the love of Jesus and salvation through Him alone. He was a Nationally Certified Facilitator for Crossroads Curriculum. He launched a local ReConnect Program promoting "Effective Paths for Behavior Change". He served on panels for City planning and activities. He pastored his congregation with love, encouraging guidance with the heart of a true shepherd. His vision was for The Pentecostal Church of Blue Mountain to be as a 'city set on a hill'; a sanctuary where the hurting and the weary find solace. Daily living out his motto, "Reaching Upward To God And Outward To Man", Pastor McKnight maintained his fervor for the gospel and his commitment to connecting the called according to His purpose until the afternoon of February 27th, 2021 when he was called to his eternal home with the Lord Jesus Christ. In Lieu of Flowers the family is requesting donations in honor of Rev. McKnight to: The Pentecostal Church P.O. Box 35 Blue Mountain, MS 38610 Condolences for the McKnight family may be sent www.mcbridefuneralhome.com

The family of Rev. Joseph "Joe" F. McKnight created this Life Tributes page to make it easy to share your memories.

Send flowers to the McKnight family.