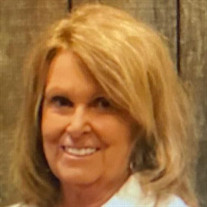 Penny Gayle Hurt Owen was born January 5, 1953 to Ellis Hurt and Eloise Richardson Hurt in Ripley, MS. Penny worked as an Eligibility Supervisor at the Mississippi Department of Human Services. She was a member of Springdale Baptist Church.... View Obituary & Service Information

The family of Penny Gayle Hurt Owen created this Life Tributes page to make it easy to share your memories.

Send flowers to the Owen family.