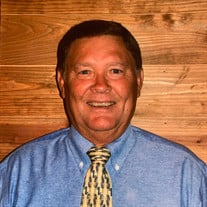 Niles Hugh Jones, 75, passed away Monday, October 21, 2019, at his home in Ripley, MS. He was born on November 15, 1943, to Christopher Hugh and Edna Pauline Childers Jones in Marshall County - Mississippi. Niles was Owner & Operator of Chevron... View Obituary & Service Information

The family of Niles Hugh Jones created this Life Tributes page to make it easy to share your memories.

Send flowers to the Jones family.