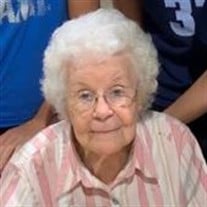 Natalie Pauline Childers Kelly, 100, passed away Thursday, December 12, 2019, at Baptist Memorial Hospital in Memphis, TN. She was born on September 5, 1919, to George Otis and Wilmeta Hodges Childers in Tippah County-Mississippi. Pauline was a homemaker and a member of Ridgeway Baptist Church in Memphis. Services will be at 1:00 P.M. Monday, December 16, 2019, at McBride Funeral Home Chapel with Dr. Ashley Ray and Mr. Charles Davis officiating. Burial will follow in Wier's Chapel Cemetery in Ripley, MS. Visitation will be Monday, December 16, 2019, from 12:00 Noon until service time at 1:00 P.M. at the funeral home. Pauline is survived by one son: Julian Rogers Kelly and his wife, Marilyn of Germantown; one sister: Barbara Davis of Ripley, MS; two grandchildren: Peyton D. Kelly and his wife, Sabrina G. of Arlington, TN, Nathan R. Kelly of Germantown, TN; and four great-grandchildren. She was preceded in death by her parents; her husband: Joe Rogers Kelly, who passed away in 1996; two brothers: Johnny Harlan Childers, G. W. Childers; and one sister: Helen Ellis Pruitt. Pallbearers will be her grandsons, great-grandsons and her nephews. Expressions of sympathy, for the Kelly family, may be sent to www.mcbridefuneralhome.com

The family of Natalie Pauline Childers Kelly created this Life Tributes page to make it easy to share your memories.

Send flowers to the Kelly family.