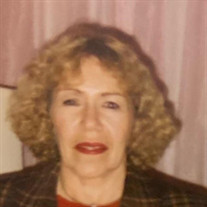 Tupelo, MS - Nada Heavener, 83, entered her heavenly home December, 5, 2020, at Diversicare in Ripley, MS. She was born to Truett Heavener and Katie Mae Hutchison Heavener. Nada grew up in Tippah County, graduating from Palmer High School. She went on to attend NEMCC and later received a B.S. Degree from Blue Mountain College and a Master's Degree from MS State University. Nada Moved from Tippah County to Tupelo to begin her teaching career. For 31 years she taught 3rd grade at Rankin Elementary School. She was a member of Harrisburg Baptist Church in Tupelo. Nada was an avid supporter of the city and schools of Tupelo. How she enjoyed attending football and baseball games played by Brent and his friends! Also, bringing her much pleasure were her four canine babies: Jr, Sue Ellen, Monica and Bella. Being single she devoted her life to the teaching profession and most of all to the children who were blessed to have had her as their 3rd grade teacher. Nada superbly taught academics, but she also instilled positive, valuable traits in her children. Recently, an adult stated that "Miss Heavener" was one of his most caring teachers and that he knew she really cared for him as a "little human being" back in 1962. Nada was honored as "Teacher of the Year" during her time at Rankin. She loved the following: "A hundred years from now, it won't matter what my bank account was, the sort of house I lived in or the kind of car I drove...But the world may be a better place because I made a difference in the life of a child." Nada is survived by a sister, Elizabeth B. Pullam of Ripley; special nieces: JoBeth Akins (Ken) of Ripley, Meg Bruce of Tupelo, Lisa Sandroni (Todd) of Tupelo; a special nephew, Brent Heavener (Abby) of Jackson, MS and great nephews: Kinnon and Benjamin Akins of Ripley; Ray and Will Sandroni of Tupelo; and great niece: Mary Thornton Heavener of Jackson, MS; special cousins: Jimmy Harrington of Tupelo, and Billie Martin of Dallas, TX. Preceded in death by her parents; and her precious brother: Ronnie Heavener in 2016. There will be a service for special friends and family, Saturday, December 12, 2020, at Palmer Baptist Church in Ripley, with Bro. Michael Baker officiating. Visitation will be Saturday, December 12, 2020, from 12:00 Noon until service time at 2:00 PM at the church . Burial will follow in Palmer Baptist Church Cemetery. Pallbearers will be Luke McAlpin, J. C. Kendrick, Shane Harrington, Brent McMillin, Todd Sandroni, and Ken Akins. Social distancing guidelines will be followed and facial coverings are required. In lieu of flowers donations may be made to the Tupelo-Lee Humane Society P.O. Box 2143 Tupelo, MS 38803. Expressions of sympathy for the Heavener family may be sent to www.mcbridefuneralhome.com

The family of Nada E. Heavener created this Life Tributes page to make it easy to share your memories.

Send flowers to the Heavener family.