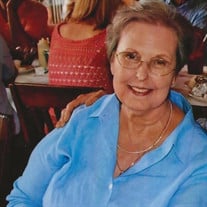 Mrs. Mary Eloise Shelton, 81, of Ripley passed away peacefully on March 21, 2020, at the Greenhouses in Tupelo. Eloise was born in Ashland, one of 5 children, to Luther Frank Norris and Margaret Jeanette Norris. She grew up in Ashland and on a farm in the Shady Grove community of Tippah County. As a teenager, Eloise, while working for Dr. Ralph Ford in Ripley, met Boone Shelton, and they married two months later. The young couple moved to Wesson, where Eloise attended Copiah-Lincoln Community College and Boone taught at the community college. In the early 1960’s, she and Boone returned to Tippah County. Eloise served as clerk of the Tippah County Draft Board for Selective Service, worked for her husband at the Chancery Clerk’s Office, and retired as Director of the United Community Action Agency in Ripley. Boone and Eloise worked together for the Shady Grove Water Association. She was a member of the West Ripley Baptist Church. Eloise loved her family, especially her grandchildren and great-grandchildren. The light in her life went out when Boone died in March, 2010, and she longed to be reunited with him. Eloise is survived by her son David and wife Missy, of Saltillo; her daughter Emily and husband Ben, of Columbus; her brother Bill Norris of Florida; her sister Virginia Reneau, of Louisiana, and her sister-in-law Rosa Nell Norris. She is also survived by her grand-daughters Mary Beth Chenault (Kris), of Huntsville, Anna McCullouch (Travis), of Canton; and great-grandchildren Connor Chenault, Boone Chenault, and Liza McCullouch. She had many nieces and nephews whom she loved, and who treated her as a second mother. Eloise was preceded in death by her husband, Boone; her parents; her sister, Frances Huddleston, and brother-in-law Murry Huddleston; her brother, Joe Frank Norris; her sister-in-law Marge Norris; and her brother-in-law Fred Reneau. The family would like to extend heartfelt thanks to the amazing staff and nurses at Cedars Healthcare and the Simerson Greenhouse, who cared for Eloise with love and compassion in her last illness. A private funeral service will be held on March 23. The family invites remembrances and expressions of sympathy to be shared to: www.mcbridefuneralhome.com.

Mrs. Mary Eloise Shelton, 81, of Ripley passed away peacefully on March 21, 2020, at the Greenhouses in Tupelo. Eloise was born in Ashland, one of 5 children, to Luther Frank Norris and Margaret Jeanette Norris. She grew up in Ashland and on... View Obituary & Service Information

The family of Mary Eloise Norris Shelton created this Life Tributes page to make it easy to share your memories.

Send flowers to the Shelton family.