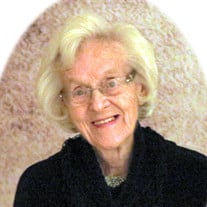 Mrs. Martha Elizabeth Bennett Shappley (affectionately known as "Mamaw") was welcomed to her eternal home on November 18, 2019 a the age of 98. She was a resident of Rest Haven Nursing Home. Mamaw was born on February 11, 1921 in Benton County to William Lee and Georgia Anne Gullett Bennett and married Roy Snow Shappley on November 16, 1940 in Tippah County where she spent most of her life. She was a loving mother, grandmother and great grandmother. She was a faithful member of the Ripley Church of Christ. Mamaw had various jobs through the years, but her happiest years were spent at the Shappley Supermarket in Blue Mountain - a store owned and operated for many years by her husband and son. Mamaw enjoyed reading, working in the yard and in her flowers, and cooking Sunday dinner for her family as long as her health permitted. Mamaw can be described as faithful in all her ways - faithful to her husband, to her family, and above all to her Lord. She was frugal, stretching a dollar as far as it could go and saving something out of every dollar she ever earned or received. Mamaw was a fine housekeeper and hostess. Her kitchen counters, furniture, and floors were spotless. If you ever visited her home, you must have something to eat and drink - a piece of cake or pie and a cup of coffee or glass of tea. Last but not least, Mamaw was funny even if she didn't mean to be. Around the Sunday dinner table, she would respond to what she thought she was hearing not necessarily to what was being said. Her comments would be funny and some that her family will always remember. Her family has a lot of memories to pass on to future generations. Those remaining are: one daughter Myra Shappley Shelly (Rubel) of Spring Hill, Tennessee; one daughter-in-law Kathy Shappley of Ripley; nine grandchildren Roy Bennett Shappley, Jr (Andrea), Dan Shappley (Michelle), Tatum Shappley (Heather), all of Ripley, Colt Shappley of Corinth, Myra Michelle Shelly Arms (David), Timothy James Shelly (Sherri), Thomas Rubel Shelly II (Holly), Stevie Sims, Shawn Eugene Sims (Monique), T. J. Sims. Nine great-grandchildren Brinkley Shappley Spillers (Terry), Tucker, Peyton, and Nichols Shappley, Jase Roberson, Jackson, Haydren and Isla Shappley, Loren (Brent) Hunsucker, Timothy Sims and eleven other great-grandchildren; one great-great grandchild Hoover Bennett Spillers. Preceding her in death were her husband, Roy Snow Shappley, her parents, one son, Roy Bennett Shappley, Sr., one daughter Larraine Shappley Sims. one brother, Samuel Eugene Bennett, two sisters, Annie Lee Bennett Reese, Jessie Mae Bennett Taylor.one son-in-law, Steve Sims, one granddaughter, Mary. Pallbearer will be Ben Shappley, Dan Shappley, Colt Shappley, Tatum Shappley, Tucker Shappley, Nichols Shappley, Jase Roberson, Stevie Sims, Shawn Sims. Services will be Monday November 25, 2019 at 2:00 P.M. in McBride Funeral Home Chapel with Minister Rubel Shelly officiating.Burial will be in Tiplersville Cemetery. Visitation will be Monday, November 25, 2019 from 12:00 noon until service time at McBride Funeral Home. Memorials in Elizabeth's honor may be made to My Choices Pregnancy Clinic, P.O. Box 1351, Ripley, MS 38663 or Pine Vale Children's Home, 1872 CR 700, Corinth, MS 38834.

Mrs. Martha Elizabeth Bennett Shappley (affectionately known as "Mamaw") was welcomed to her eternal home on November 18, 2019 a the age of 98. She was a resident of Rest Haven Nursing Home. Mamaw was born on February 11, 1921 in Benton County... View Obituary & Service Information

The family of Martha Elizabeth Bennett Shappley created this Life Tributes page to make it easy to share your memories.

Send flowers to the Shappley family.