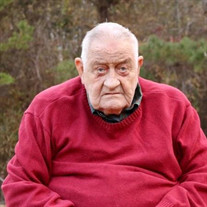 Marshall Daniel Beaty, 78, passed away Tuesday, December 24, 2019, at Tippah County Hospital in Ripley, MS. He was born on January 16, 1941 to Ellis and Jettie Cappleman Beaty in Dumas, MS and he would always add in that he was the fourteenth child and weighed 14 pounds. He was a big man with an even bigger heart. Marshall was a member of Oakland Baptist Church where he was an active member until his health declined. He was formerly an employee at WoodCraft, Inc as supervisor of the night shift and he devoted 30 plus years building his own furniture factory Dumas Frames. Whenever he wasn’t working, he was watching westerns, drinking coffee, or helping someone. Not only was he a hard worker, he was a loving devoted father and grandfather. Storytelling was one of his specialties, and he seemed to have a new one for every occasion. To know him was to love him. Services will be at 2:00 PM Friday, December 27, 2019, at McBride Funeral Home Chapel with Bro. Bill Baker and Bro. Cody Matlock officiating. Burial will follow in Dumas Cemetery. Visitation will be on Thursday, December 26, 2019 from 5:00 PM until 8:00 PM and continue Friday Morning at 7:00 AM until service time at McBride Funeral Home. Marshall is survived by two daughters; Mae Martinez (Candido) of Ripley, MS, Lori Mims (Lacy) of Dumas, MS; four sons: Terry Hopkins (Lisa) of Dumas, MS, Thomas Beaty of Odessa, TX, Marty Hopkins (Melissa) of Iuka, MS, Brad Beaty of Dumas, MS; two sisters: Carolyn Self of New Albany, MS, Jean King of Houston, MS; (14) grandchildren and eleven great-grandchildren. He was preceded in death by his loving wife Daphine Pulse Beaty, his parents, and eleven brothers and sisters. Pallbearers will be Christopher Mullins, Brock Lindley, Lee Sonwineski, Kerry Newby, Jeff Newby, William Beaty, Matthew Hopkins, Brandon Sipes. Expressions of sympathy for the Beaty family may be sent to www.mcbridefuneralhome.com

Marshall Daniel Beaty, 78, passed away Tuesday, December 24, 2019, at Tippah County Hospital in Ripley, MS. He was born on January 16, 1941 to Ellis and Jettie Cappleman Beaty in Dumas, MS and he would always add in that he was the fourteenth... View Obituary & Service Information

The family of Marshall Daniel Beaty created this Life Tributes page to make it easy to share your memories.

Send flowers to the Beaty family.