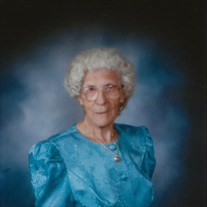 Mae Bell Dillon, born October 3, 1926, received her wings on October 10, 2019. She is of the Baptist Faith. Born to Sherman and Siglee Cantaberry Lancaster in Courtland, AL. She was married to the late George Dillon. She is survived by one son, Delane Lancaster (Linda) of Ripley. Five grandchildren, Paul & Wendy Lancaster of Chicago, IL , Jill Lancaster (Connie) of Jacksonville, FL, Stephanie (Steve) Turner of Ripley and Chris (Cindy) Helton of New Hope, MS. Twelve great grandchildren, Five great, great grandchildren. One brother Charles Lancaster. A special niece, Tammy Wilbanks. A host of nieces , nephews and cousins. She was preceded by her parents, two sisters, Opal Zeeman, Frances Taylor, two brothers K. C. Lancaster and Jay Lancaster. Pallbearers are: Rickey Taylor, Ben Taylor, Jesse Wilbanks, James Wilbanks, Nathan Turner, Cole Helton. Mae Bell had only one son but she was a motherly figure to many in the family. She helped to raise her grandchildren, nieces & nephews. She was a loving grandmother, great grandmother & great great grandmother. Mae Bell was a hard worker all her life. She and her siblings worked in the fields as children. When she was an adult, on the pursuit to provide a better life for her son, Delane, she moved north to Chicago where she worked in the factories and local hospitals. While she was working at Illinois Masonic Hospital she met George Dillon. They fell in love and later married. Mae Bell loved to listen to and sing spiritual Hymns and gospel songs. She was a supporter of The Gospel Survivors. Even while recovering after her stroke, she would often be found caring for and helping out her fellow residents at Diversicare. Her spirit to give to others was an act she continued up until her last days. Condolences for the Dillon family may be left at www.mcbridefuneralhome.com

Mae Bell Dillon, born October 3, 1926, received her wings on October 10, 2019. She is of the Baptist Faith. Born to Sherman and Siglee Cantaberry Lancaster in Courtland, AL. She was married to the late George Dillon. She is survived by one... View Obituary & Service Information

The family of Mae Bell Lancaster Dillon created this Life Tributes page to make it easy to share your memories.

Send flowers to the Dillon family.