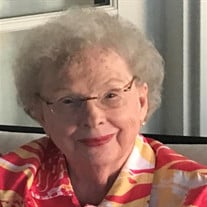 RIPLEY, MS - Lucie Otelia Horton West, 91, died Sunday, August 15, 2021 at Jackson Madison County General Hospital, in Jackson, TN. She was born October 4, 1929 in Hub, Mississippi to Loyd Ellis Horton Sr. and Christine Rich Horton. She lived her early years in Pine Grove, MS, and Chalybeate, MS, then she moved to Ripley, MS, at the age of seven. In Ripley, she graduated High School, and then attended Northwest College in Senatobia, MS. After two years, she finished up college and graduated with a Degree of Education from Blue Mountain College in Blue Mountain, MS. Upon graduation, she began teaching English in Okolona, MS, where she met her husband of 65 years, Robert Dwight West of Centerville, TN. They married in 1952 in Ripley, MS, and moved to Nashville, TN. During her husband's career, she lived in Nashville, TN, Atlanta, GA, Dallas, TX, and Chicago, IL. Also, during that time, she became a homemaker and raised both of her children, Laura and Brian. In 1983, Otelia and family moved back to Ripley upon Robert's retirement. She has lived in Ripley ever since, surrounded by friends and family. She also has been a devout member of the Friends Sunday School class at First Baptist Church, Ripley, MS. Mother Theresa once famously said, ''Preach a sermon daily, and only if absolutely necessary, use words." The beauty of Otelia's life and existence was not what she said, but her actions of quiet service and examples of kindness she displayed daily were a testimony for us all. She will be greatly missed. Visitation will be graveside for family and friends at Tippah Memorial Gardens, starting at 2 p.m. with the service immediately at 2:30 p.m. following on Wednesday, August 18, 2021. She is preceded in death by her parents: Loyd Ellis Horton Sr., Christine Rich Horton of Ripley, MS; her husband of sixty-five years: Robert Dwight West of Ripley, MS; her brother: Loyd Ellis Horton Jr, of Ripley, MS and sisters Francis Horton Anderson of Bismarck ND, and Jenny Horton McGill, of Ripley, MS. She is survived by one sister: Patricia Horton Stanford of Ripley, MS; one daughter: Laura West Cochran and her husband: Philip Clinton Cochran of Helena, Al; one son: Brian Dwight West and his wife Joanna Cook West of Brentwood, TN; four grandchildren: Clinton Armstrong Cochran, Elizabeth Lynne Cochran, Rachel Irene West, and William Robert West; two great grandchildren: Robert Armstrong Cochran and Barrett Lane Cochran. Otelia loved and always supported her family with encouragement, advice and lots of hugs. She is very loved by her family and they know she is serving the Lord as she has done all these years on earth to her God, family, and friends. Pallbearers will be Phil Cochran, John Stanford, Johnny Carter, Barry Grisham, Loyd Horton, John Tate, Clint Cochran, and William West. In lieu of flowers, the family requests that memorials be directed to the My Choices Pregnancy Help Clinic, P.O. Box 1351 , Ripley, MS, 38663.

The family of Lucie Otelia Horton West created this Life Tributes page to make it easy to share your memories.

Send flowers to the West family.