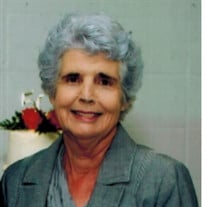 Linda Ann Tigrett Chapman, 78, died on Thursday, March 26, 2020, surrounded by her family, at her residence in Ripley, MS. She was born on April 20, 1941 to the late Delta Randolph and Rhetta Leola Wingo Tigrett. She was a faithful member of the Chapman Church of Christ and a loving homemaker. She was married to her beloved husband, Starrett, on July 19, 1956. She was a devoted mother and a remarkable “Mama Linda” to her grandchildren. She was also an avid gardener who could grow the most delicious vegetables and the most beautiful flowers. A private, family graveside service will be held at Chapman Church of Christ on Friday, March 27, at 2:00 P.M. She is survived by her husband of 63 years, Charles Starrett Chapman of Ripley, MS; one son, Charles Terry Chapman (Robin) of Ripley; three grandchildren, Molly Maribeth Chapman Moore (Chris) of Ripley, Charles Guyton Chapman (Olivia) of Booneville, MS, and Mallory Rue-Anne Chapman Smith (Winston) of Pearl, MS; four great-grandchildren, Chapman David Moore, Penelope Liv Chapman, Lottie Rue-Rosalie Moore, and Genevieve Claire Chapman. She is survived by one sister, Bobbye Sue Tigrett Chapman, of Ripley. She is also survived by a host of extended family, friends, and two very special caregivers, Ms. Dorothy Mejia and Ms. Margaret Spears. She was preceded in death by her parents and her father and mother-in-law, Hugh Ralph Chapman and Lottie Rue Mauney Chapman. She was also preceded in death by her brother-in-law, James Barrett Chapman and one nephew, Blair Tigrett Chapman. Pallbearers will be Chase Chapman, Chris Moore, Winston Smith, Barry Chapman, Jason Grisham, Jonathan Chapman, and Andy McElyea. The family invites remembrances and expressions of sympathy to be shared to: www.mcbridefuneralhome.com.

Linda Ann Tigrett Chapman, 78, died on Thursday, March 26, 2020, surrounded by her family, at her residence in Ripley, MS. She was born on April 20, 1941 to the late Delta Randolph and Rhetta Leola Wingo Tigrett. She was a faithful member... View Obituary & Service Information

The family of Linda Ann Tigrett Chapman created this Life Tributes page to make it easy to share your memories.

Send flowers to the Chapman family.