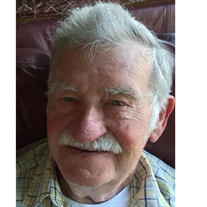 Leslie Clifford Buchanan, Sr., born April 9, 1933, left us on October 6, 2021 to join his bride of 62 years, Ida, and their middle child, Patti, in his Heavenly home prepared by his Lord. “Mr. Buck” leaves behind his son, Les Buchanan, Jr of Oxford, MS, daughter Linda Buchanan of Gulfport, MS, daughter Tk Buchanan of Memphis, TN, their spouses, seven grandchildren and five great-grands. His children proudly retain his name for a reason. Buck was a remarkable man, loved by those who knew him and remembered fondly by everyone he ever met in his long, fruitful life. He was a veteran of the US Navy, where the electrician training he received prepared him for a long career in public utilities, retiring from both Memphis, Light, Gas & Water and Oglethorpe Power Corporation Atlanta, GA. He was a master storyteller with a wonderful sense of humor, an extrovert who never met a stranger he couldn’t make a friend. He was friendly and warm, with a broad smile and dancing blue eyes that made everyone in his presence feel safe and loved. He taught his children to love abundantly, to be ethical and honest, to respect God, authority, and elders. For more than 50 years Buck was a faithful servant of God and the Southern Baptist church, serving as an elder, a deacon, a teacher and brother in Christ. He was a Freemason and shaped the lives of hundreds of men who followed. He was a serious gardener, believing that growing food and feeding people was among the most important ministries we are called upon to do. He was also an avid fisherman and taught all of his children and grandchildren the art. Each one is fully capable of baiting their own hooks and this was a source of pride for him (though he always baited the hook of his youngest daughter no matter how old we all got). He met his one true love when they were 17 and convinced her to wait for him with the promise of marriage while he traveled the world in a submarine. The family’s favorite story is of him defending this girl’s honor from a young punk named Elvis, who had eyes for his Ida. Buck was born in Ripley, MS and unto this same soil we return the vessel he leaves behind, right beside his beloved as planned and promised.

The family of Leslie Clifford Buchanan created this Life Tributes page to make it easy to share your memories.

Send flowers to the Buchanan family.