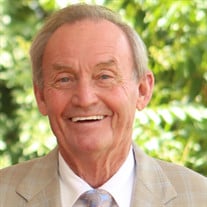 The communities of Ripley and Meridian, Miss. lost a beloved member on April 25, 2022, when Leon Bailey, Jr. passed from this Earth at Baptist Memorial Hospital in Oxford, Miss. surrounded by his family at the age of 74. People never wondered what Leon's opinion was about anything. He was known for his extreme candor wrapped in Southern charm. He kept a room laughing and never met a stranger. To know him was to love him and it could mean you were given a nickname. He cared deeply about his community and loved his family fiercely. Before his retirement from the cable company in 2017, Leon could often be found in their office on Main Street helping customers and troubleshooting television and Internet connections. One of Leon's favorite work activities was meeting with "sales" people but truth be told, he gave them more than they ever sold him in the way of wisdom and entertainment. After his and Diane's retirement, full time babysitting occupied their time giving them many memories with their two adored grandsons, Bailey and Sam. Leon was born in Meridian, Miss. to Prue and Leon Bailey. He graduated from Meridian High School where he lettered in football and baseball and was elected class favorite, a title that would follow him throughout life. He excelled on and off the field, earning the Ben F. Cameron Award, an annual award given to an athlete whose characteristics most closely exemplify the "fighting Wildcat Spirit" of hard work, good sportsmanship and desire. Leon attended Mississippi State University his freshman year and played baseball. He transferred and graduated from Millsaps College where he played both football and baseball. After college, Leon moved back home to Bailey, Miss., outside of Meridian, where he worked for the family business and would later open Bailey Realty. But his move back home would also introduce him to his future wife, Diane Elliott. Leon moved to Ripley in 1987 to take over his father-in-law's business, Ripley Video Cable where he served as President and CEO. He served for many years on the Board of Directors for the Mississippi Cable Telecommunications Association where he mentored many cable operators bringing humor and honesty to the quarterly meetings and countless meetings with legislators. Leon served as a Deacon, Elder and Trustee of Ripley Presbyterian Church and was a faithful member and served as President of the Seekers Sunday School class. Leon is survived by his loving wife of 46 years, Diane Elliott Bailey of Ripley; son Leon "Elliott" Bailey of Atlanta, Georgia; daughter Lauren Bailey Steverson (Jody) of Ripley and two grandchildren, Bailey and Sam Steverson; and his mother Prue Bailey of Meridian. Leon is preceded in death by his father, Leon Bailey and brothers, David Alison and Robert Preston Bailey. Visitation will be held on Thursday, April 28 from 5 pm until 7 pm at Ripley Presbyterian Church and from 11 am until 1 pm on Friday, April 29. A Celebration of Life will follow at 1 pm also at Ripley Presbyterian Church. Fond memories and funny stories may be shared at: https://www.mcbridefuneralhome.com/obituaries/Leon-Bailey-3/#!/TributeWall Honorary pallbearers are Judge Robert Elliott, Dr. Charles Elliott, Dr. Norris Howell, Steven Parr, John Pollman, Richard Todd, Hollis Wigington and the Elders of Ripley Presbyterian Church. In lieu of flowers, the family requests memorials be made to: Ripley Presbyterian Church PO Box 556 Ripley, MS 38663 and Le Bonheur Children's Hospital PO Box 41817 Memphis, TN 38174

The communities of Ripley and Meridian, Miss. lost a beloved member on April 25, 2022, when Leon Bailey, Jr. passed from this Earth at Baptist Memorial Hospital in Oxford, Miss. surrounded by his family at the age of 74. People never wondered... View Obituary & Service Information

The family of Leon McClung Bailey Jr. created this Life Tributes page to make it easy to share your memories.

The communities of Ripley and Meridian, Miss. lost a beloved...

Send flowers to the Bailey family.