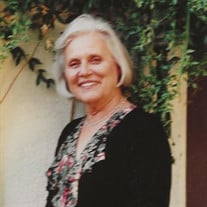 Joy Ann Moody passed away at her home March 9, 2022 at the age of 86. She was born September 21, 1935 to Ben Crum and Choppy Lee Maxwell Crum in Hickory Flat, MS. She is survived by her husband: Bobby Moody of Ashland, MS; one son: Robert... View Obituary & Service Information

The family of Joy Ann Moody created this Life Tributes page to make it easy to share your memories.

Send flowers to the Moody family.