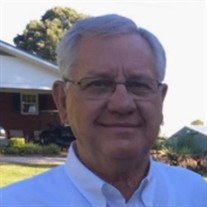 Ripley, Mississippi--- Mr. Johnny Dale Cissom passed away at his home in Ripley on November 8, 2021 at the age of 78. He was born April 13, 1943 to Fant Cissom and Ruth Windham Cissom in Tippah County, MS. Johnny was married to Gearlene Newby... View Obituary & Service Information

The family of Johnny Dale Cissom created this Life Tributes page to make it easy to share your memories.

Send flowers to the Cissom family.