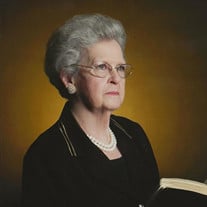 No more beautiful soul has ever lived than JOHNNIE ELIZABETH HALE HOBSON, who passed away May 2, 2020, at the Tippah County Hospital in Ripley at the age of 95. She was born on January 30, 1925, the daughter of John C. and Willie Beasley Hale, in Hickory Flat, Mississippi. She was the wife of James D. Hobson, who preceded her in death in the year 2000 after 60 years of marriage. She is also preceded in death by her parents, two brothers: James Hale and Lamar Hale, one sister: Eloise Hale Scott, and son-in-law: Gwin Winter. Mrs. Hobson is survived by three children: Gail Winter (Tommy Simpson) of Ripley, MS, Barry Hobson (Brenda) of Ripley, MS, and Jim Hobson (Dee) of Dallas, TX. She is survived by seven grandchildren: Michael Winter (Sidra) of Pontotoc, MS; Ryan Winter (Jenni) of Grenada, MS; Matt Hobson (Nicole) of Houston, TX; Kate Crozier (Chad) of Dallas, TX; Chris Hobson, David Hobson, and Lori Russell (Bobby), all of Ripley, MS. She is also survived by 15 great-grandchildren. Mrs. Hobson was a long-time member of the Beech Hill Church of Christ, faithfully attending until prevented by health problems. Her passion was reading and memorizing prayers and spiritual poetry. She loved cooking and had quite a collection of cookbooks. She was known for loving her fellowman and doing good for others. Her grandchildren and great-grandchildren were the joy of her life, and she kept up with each of them and what was happening in their lives. Never one to brag, boast or judge, Johnnie lived her life in the likeness of Jesus. Always gracious, patient, and kind, after raising her three children, she devoted her life to the role of primary caretaker for her beloved husband, James, after his diagnosis of Alzheimer’s disease in 1995. Her home was and remains the most warming and welcoming sanctuary to all who entered. She was a devoted listener, confidant and friend. A private family graveside service will be held on Tuesday May 5, 2020, at the Beech Hill Church of Christ Cemetery with Ministers King McCarver and William J. Coates officiating, and remarks by Michael Winter. Pallbearers will be Michael Winter, Ryan Winter, Chris Hobson, David Hobson, Matt Hobson, Bobby Russell, Aleck Hobson, Luke Hobson, and Reed Mitchell. The family requests that any memorial donations be made to: St. Jude Childrens Hospital, 262 Danny Thomas Pl, Memphis, TN 38105, or, Pine Vale Childrens Home, 1872 County Road 700, Corinth, MS 38834.

No more beautiful soul has ever lived than JOHNNIE ELIZABETH HALE HOBSON, who passed away May 2, 2020, at the Tippah County Hospital in Ripley at the age of 95. She was born on January 30, 1925, the daughter of John C. and Willie Beasley... View Obituary & Service Information

The family of Johnnie Elizabeth Hale Hobson created this Life Tributes page to make it easy to share your memories.

No more beautiful soul has ever lived than JOHNNIE ELIZABETH...

Send flowers to the Hobson family.