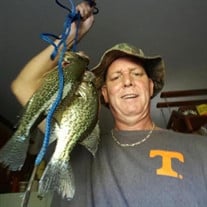 Mr. John Wesley Stapleton, III, 55, passed away on June 18, 2022 at Sanctuary Hospice House in Tupelo, Mississippi. He was born April 10, 1967 to John Stapleton, II and Deborah Sue Royston Stapleton in Bristol, TN. John was in the 82nd Air Born Division in the Army. He was a Supervisor at Ashley Furniture for 10 years and attended the Rock Hill M.B. Church. After relocating to North Mississippi, Wes met and had a beautiful courtship with Lillie. The love of his life. They were married in Gatlinburg in 1998. The love they displayed for each other was very evident. They loved their families and friends. Wes as an excellent grill master, fisherman and had a great sense of humor!! He was an avid Tennessee Vols fan!! John is survived by his wife: Lillie Stapleton of Tiplersville, MS; one daughter: Jennifer Reyes (Jacob) of Louisiana; five step-duaghters: Sharon Joyce (Loletha), Cora Moore (Santana) both of Atlanta, GA, Carla Brown (Chaunty) of Flint, MI, Willie David (Brandi) of Warren, MI, Solange Davis (Tramine) of Las Vegas, Nevada; one brother: Clinton Stapleton (India) of Bristol, TN; fifteen grandchildren; several great-grandchildren; four aunts: Joan Stapleton of Florida, Judy Haney of California, Florance Tilman (Scott) of Florida, Jan Graham of Bristol; one uncle: Buddy of Roystow (Susan) of Florida. He is preceded in death by his parents. We would like to thank the Ball Hill Community Freddy Jones, Carol Edgeston, Catherine Edgeston, Steven “Hollywood” Chessor, Danny Edgeston, James and Fancis Gibbs, Carrie Faulkner Kentrell Gibbs. Hospice House “The Sanctuary” of Tupelo Ms. You all have Blessed my life and I am grateful for each one of you.

The family of John Wesley Stapleton III created this Life Tributes page to make it easy to share your memories.

Send flowers to the Stapleton family.