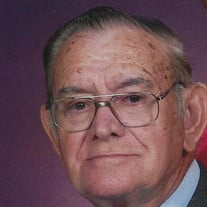 Blue Mountain, MS - Joe Wash Smith, 90, passed away on Sunday, August 4, 2019, at Tippah County Health and Rehab in Ripley. He was born on March 14, 1929, to Wash Lee and Mary Crawford Smith in Tippah County, MS. He was retired as Supervisior... View Obituary & Service Information

The family of Joe Wash Smith created this Life Tributes page to make it easy to share your memories.

Send flowers to the Smith family.