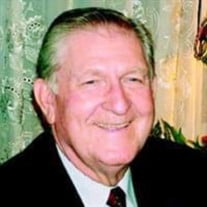 Jimmy Le Earl Hill was in born in Falkner, MS September 11, 1933, to Robert B. Hill and Juanita Welch. He was the second of their 14 children. He married his wife, Elizabeth Clark, December 20, 1952, the same date he left this world 69 years later. Their marriage produced three boys, Donny (Susie Clayton), Steve (Dianne Bruce), Tom (Nell Hill). Donny and his parents preceded him in death as did two brothers and a sister. He is survived by ten brothers and sisters, three grandchildren, five step grandchildren, two great grandchildren. Jimmy served his country in the National Guard and served in Germany while in the Army. When he returned home, he got an Accounting degree from Ole Miss with assistance from the G.I. Bill. After brief accounting jobs in Meridian and Memphis he returned home to work at Biltrite shoe factory as comptroller. His father, Robert, built their present home in Ripley in 1965. After 20+ years at Biltrite he joined his brothers as accountant at Hill Brother Construction company until his retirement 20+ years later. He was an avid golfer with his golfing buddies Sydney, Bonnie, Jack, and J.M. He was an avid Ole Miss fan and was recognized as alumni of the year in 2013. He served as a leader in the Boy Scouts on Yocona Area Council. He was a leader in the Jaycees. He was on the board of Bethel College in Tennessee. He was loved as a leader and counsellor in his family and in his Church, Mt. Zion Cumberland Presbyterian Church where he served as an elder since 1958. How do you sum up the life of a good man after 88 years? He loved God and his family. He made friends and not enemies. In lieu of flowers the family would encourage donations in Jimmy's name to the Peru Center for Law and Justice c/o Mt. Zion Cumberland Presbyterian Church, 480 CR 401, Falkner, MS 38629. The Memorial Service that was set for Wednesday, December 29 has been postponed at this time. Family requests everyone please follow CDC regulations-wear facemasks and practice social distancing.

Jimmy Le Earl Hill was in born in Falkner, MS September 11, 1933, to Robert B. Hill and Juanita Welch. He was the second of their 14 children. He married his wife, Elizabeth Clark, December 20, 1952, the same date he left this world 69 years... View Obituary & Service Information

The family of Jimmy LeEarl Hill created this Life Tributes page to make it easy to share your memories.

Send flowers to the Hill family.