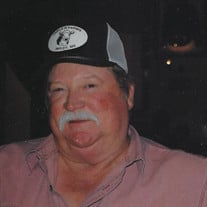 Harry L. Richardson, 67, resident of Spout Springs Community, Ripley, MS, passed away Monday, February 8, 2021 at Magnolia Regional, Corinth, MS, after an extended illness. There will be a private funeral and graveside service at Spout Springs Presbyterian Church, Ripley, MS, on February 10, 2021 at 1:00 PM. Due to Covid-19 there will be no visitation before the service. Bro. Chuck Carroll will officiate with Bro. Richie Lockhart giving opening remarks. Joe Duncan will give the eulogy. Bro. Brad Chandler will conduct the graveside service. Arrangements for the service will be provided by McBride Funeral Home, Ripley, MS. Mr. Richardson was born July 22, 1953, in Ripley, MS to the late Jeff and Sarah Nance Richardson. He is survived by his wife of 43 years, Lana Davis Richardson; his son, Jeff Richardson (wife Kayla); two grandchildren, Lee Davis and Mackenzie Richardson all of Spout Springs Community; and one sister, Shirley Richardson Lockhart of Ripley, MS. In addition, he leaves his brothers- in-law, Ronnie Davis (wife Mona) and Charles Hodges of Booneville, MS. He also leaves a host of nieces and nephews. He was preceded in death by his brother-in-law, Tommy Lockhart, his sister-in-law Dianne Davis Hodges and special friends Buck Tatum, Jr. and F.L. (Spud) Rowell. Since he was a young boy, Harry had been a member of the Spout Springs Presbyterian Church. Mr. Richardson was a dedicated employee of the Mississippi Department of Transportation for 45 years planning to retire in June 2021. He owned Triple R Farms, and it gave him great pleasure along with his blue heelers and cattle. His greatest pleasure, however, was spending time with his best buddy, Lee Davis, and his little lady, Mackenzie. At night you might find him watching his favorite TV series, M*A*S*H or a St. Louis Cardinal baseball game. He was a member of the American Legion and Board President of Spout Springs Volunteer Fire Department. Pallbearers are Randy Hood, Bill Jamieson, Ronnie Childs, Charles Plaxico, Mike Johnson, Larry Richardson, Rickey Hodum and Mark Johnson. Honorary Pallbearers are Ronnie Davis, Joe Duncan, Mark Duncan, Charles Childs, Joe Childs, Ray Crow, Jr., Dennis Grisham, Rob Elliott, Price Elliott and Ray Crawford. In lieu flowers, memorials may be made to a charity of the family and friends’ choice.

The family of Harry Lee Richardson created this Life Tributes page to make it easy to share your memories.

Send flowers to the Richardson family.