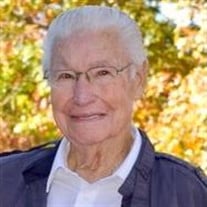 Everett Paschal Gresham (Pat), 91, of Ripley Mississippi passed away peacefully on May 18, 2021 at the Veteran's Home in Oxford, Mississippi. Pat was born March 29,1930 to Preston Cleveland Gresham and Lucy Mae Box Gresham of Hickory Flat, Mississippi. Pat was married to his beloved and devoted wife Violet (Cricket) Grisham Gresham for more than 35 years. Pat was of the Baptist faith. Pat was loved by all who had the pleasure of knowing him. He was a devoted and loving husband and stepfather. He always had a smile on his face and an infectious laugh that brought joy to so many. Pat enjoyed refereeing basketball games in Tippah and surrounding counties. Pat proudly served his country by joining the Army as a young man. He served time in both Germany and France. Once out of the service, Pat became a farmer and spent many years living and working off the land. Pat answered the duties call once again when he was elected Sheriff of Benton County. He was proud to serve and protect as it was his nature to be selfless. Pat served 12 years as Sheriff before becoming Chief of Police in Ashland, Mississippi. He continued his law enforcement career part time in Ripley, Mississippi before his retirement. Often you could find Pat at the local coffee shop with his friends, laughing and telling stories. He also loved spending time with his beloved Cricket who was the apple of his eye. Doing yard work and playing with his pets were some of his favorite hobbies. Pat's love for his family was one like no other. Pat was a loving and doting husband to Cricket, and although Pat had no biological children, he loved and cared for his four stepchildren as if they were his own. Pat was preceded in death by his parents, two brothers and two sisters. Pat is survived by his beloved wife of 35 years, Violet "Cricket" Grisham Gresham (Cricket); stepdaughters Kathy Smith of New Albany; Amanda M. Blaylock of Fredericksburg, Virginia; stepsons Stephen Smith (Cyndi) of Pine Grove; Michael Smith of Pine Grove; grandchildren; Heather, Marshall, Sarah, Tyler, Ian, James, Everett, Winston, Meagan, Michael, Will and twins: Bebe and Jackson. The funeral service for Pat will be held at McBride funeral home in Ripley, Mississippi. Visitation will be Saturday May 22, 2021 from 10:00 a.m. until 2:00p.m. The funeral immediately to follow at 2:00 p.m. Interment will be at Pine Grove cemetery. The obituary will be read by Amanda Blalock. Scripture reading will be given by Kathy Smith and Michael Smith. Stephen Smith, Jack Gadd and Milton Kuykendall will give the eulogy. The closing prayer will be given by Winston Smith. The pallbearers will be: Marshall Smith, Tommy Walters, Tony Farese, Mike Griffin, Larry Simpson, John Booth Farese, Bill Renick, Jimmy Kimmery, Ricky Pipkin Honorary pallbearers: Harry Ward, Jimmy Simpson, Billy Taylor, Danny Thompson, Dennis Grisham, Randall Huddleston, Freeman Duncan, Jack Blalock, Jim Richardson In lieu of flowers, the family requests donations be made to St. Jude Children's Hospital in Memphis, TN.

The family of Everett Paschal "Pat" Gresham created this Life Tributes page to make it easy to share your memories.

Send flowers to the Gresham family.