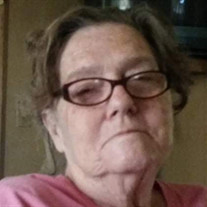 Elsie Devore Brooks passed away August 31, 2021 at her home in Ashland, MS at the age of 79. She was born October 22, 1941 to Johnny Devore and Addie Brown in Benton County, MS. She attended the Zion Chapel Pentecostal Church. Elsie is survived... View Obituary & Service Information

The family of Elsie Devore Brooks created this Life Tributes page to make it easy to share your memories.

Send flowers to the Brooks family.