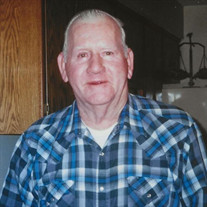 Ashland, MS - Edward Lavelle Whitehead, 86, passed away Sunday, November 22, 2020 at the Tippah County Hospital in Ripley, MS. He was born on July 20, 1934, to Marlin B. and Minnie Burnett Whitehead in Ashland, MS. He was a retired Truck... View Obituary & Service Information

The family of Edward Lavelle Whitehead created this Life Tributes page to make it easy to share your memories.

Send flowers to the Whitehead family.