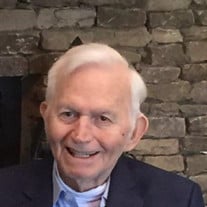 RIPLEY, MS. - Edward "Ed" Coleman Beibers, of Ripley, Mississippi, passed away at Stoneridge of Farmington Assisted Living on January 16, 2021 after a brief illness. Ed was 84 years old and surrounded by close family at the time of his passing. Most recently, he was a regular attendee of Oakland Baptist Church in Corinth, Mississippi. Ed was born in rural Benton County, Mississippi, on May 21, 1936. He was the second child and the first son of William Claude and Ada Weatherly Beibers. After graduating from Ripley High School in 1954 and Northwest Junior College in 1956, Ed enlisted in the U.S. Navy and served on the U.S.S. Pictor until 1960. While in the Navy, he realized his lifelong dream of traveling to Japan, Hong Kong, The Philippine Islands, Pearl Harbor, and many other beautiful places. After returning home in 1960, he attended Mississippi State University and courted Betty Sue Hatcher, who became his best friend and the love of his life. Married in 1963, Ed worked as an engineer, which remained his profession until his retirement in 1998. Ed and Betty remained very devoted to each other throughout their 58 - year marriage. Ed's favorite moments were those spent with family, attending horse shows, or working in his garden. He especially enjoyed reading his Bible and engaging others in conversation about prophecy and analysis of current events as they related to Scripture. He demonstrated his intelligence and remarkable memory often by quoting large passages from the Bible or reciting poems memorized in high school, even in his senior years. Although Ed was known for being very reserved, he loved to tell stories about his family or adventures in the Navy. His well-developed sense of humor and quick wit often caused eruptions of laughter among his family and friends. He is survived by his wife Betty, their daughter Tanya Beibers Nelson, his brother William Vernon Beibers (Joyce), his sister Jewel Beibers Byrd, his sister- and brother-in-law Joyce Jones (Robert Vernon) and several nieces, nephews, and cousins. He is also survived by special extended family members Lamar and Marsha Criswell, Pat and Travis Nelson, and many others who were blessed to call Ed their friend. He was preceded in death by his parents, Ada & W.C. Beibers, a sister, Sarah Beibers Groves Manning, his son-in-law Rodney T. Nelson, and his father- and mother-in-law, Murry and Florence Hatcher. The memorial service will be held Friday, February 12, 2021, at 1:00 p.m. at McBride Funeral Home in Ripley, MS. In lieu of flowers, the family requests that donations be made to one of Ed's favorite charities, Feed the Children, or The Gideon's International.

RIPLEY, MS. - Edward "Ed" Coleman Beibers, of Ripley, Mississippi, passed away at Stoneridge of Farmington Assisted Living on January 16, 2021 after a brief illness. Ed was 84 years old and surrounded by close family at the time of his passing.... View Obituary & Service Information

The family of Edward Coleman "Ed" Beibers created this Life Tributes page to make it easy to share your memories.

Send flowers to the Beibers family.