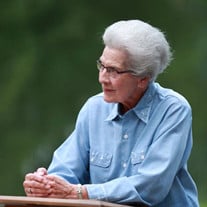 Johnnie M. Armstrong, April 23, 1932 - September 30, 2019 They that wait upon the LORD shall renew their strength; they shall mount up with wings as eagles... On the morning of Monday, September 30, 2019, Johnnie M. Armstrong - beloved educator, role model of servant leadership, mentor, coach, friend, and true handmaiden of the LORD -found renewed strength. Trusting in one of her favorite Scripture passages, Isaiah 40:31, with eagle's wings she soared to her heavenly home. "Miss Johnnie", a native of Nashville, Tennessee, was preceded in death by her parents, Clyde and Ethel Hutcherson Armstrong, and sister Jewell Armstrong Babson. She is survived by her beloved cousin Tommy Duane Arnold of Memphis and niece Lee Ann Babson Johnson of Boone, North Carolina. Miss Johnnie also leaves behind a host of co-workers and close associates who claim her as "family" hundreds of students and summer campers to whom she was a second Mom; her adopted family, Bob and Linda Hamil Orwig of Dahlonega, Georgia; and three godchildren, Mary Hamil Gilbert of Birmingham, Chad Orwig of Atlanta, and Gabriel Owrig of New Orleans. From 1954 to 2018, Dr. Johnnie Armstrong served Blue Mountain College as an outstanding faculty member- a dedicated teacher in the field of health, physical education, and activity courses. Serving under no less than six BMC presidents, she gave sound leadership and direction to the development of curriculum, organized intramural sports on campus, began and expanded intercollegiate athletic competition, served as BMC's first athletic director, and represented BMC in exemplary fashion in state and national organizations. Among other things, she served as president of the Mississippi Association of Health, Physical Education and Recreation, and was on the frontline of the development of intercollegiate sports programs for women on state and national levels. As Athletic Director, she was actively involved in the Association of Intercollegiate Athletics for Women (AIAW), and later led Blue Mountain College to join the National Association of Intercollegiate Athletics (NAIA) in 1982. Always striving to advance her profession, she earned the respect and admiration of her students, her peers, and colleagues all over the nation, as well as countless awards and recognitions. To name a few: . Female Athletics Administrator of the Year - District 24 . NAIA Athletic Administrator of the Year . Mississippi Association for Health, Physical Education, Recreation and Dance (MAHPERD) "Price in Teaching Award" . The National Association for Girls and Women in Sports "Pathfinder Award" . Blue Mountain College Outstanding Faculty Member Award - 1979 and 2000 . Higher Education Appreciation Day - Working for Academic Excellence (HEADWAE) Award - 1988 and 1997 . Dedication of the Campus Fitness Center as the Johnnie Armstrong Gal-ry - 2002 . Dedication of the new floor in Tyler Gymnasium as Johnnie Armstrong Court - 2017 . "Meritorious Service" induction into the NAIA Hall of Fame - 2006, which signified the highest ideals of intercollegiate athletics and fine moral character Upon retiring from the classroom, Miss Johnnie served as Special Ambassador of BMC, working closely with the Office of the President and Dr. Barbara Childers McMillin. Instrumental in the development of a Christian camp for girls in Ridgecrest, North Carolina, Johnnie Armstrong served this entity, Camp Crestridge for Girls, from 1955 to 1988, as Assistant Director, and as Director. At camp she maintained a legendary reputation for her rifle marksmanship as the world-class rattlesnake killer on the mountain. In this service and ministry as well as in that of educator, Johnnie Armstrong used the gifts GOD gave her - a powerful personality, quick wit and intelligence, athleticism, fierce loyalty, strength of character, and dynamic work ethic - to impack students, campers, friends, and contemporaries in meaningful and life -changing ways. From the time she came as a student to Blue Mountain College, a member of the Class of 1953, until her earthly journey ended, Johnnie Armstrong was a devoted member of Lowrey Memorial Baptist Church in Blue Mountain. There too she served in many capacities, but foremost was her office of ENCOURAGER. Under the direction of Lowrey Memorial and Blue Mountain College, a celebration of her life will be held on the college campus in the Modena Lowrey Berry Auditorium on Saturday morning October 5 at 11:00 O'clock. Visitation times planned for Friday evening, October 4 from 4:00-7:00 P.M. and Saturday Morning from 9:00 a.m. until time of the service. A light luncheon will be served in the Ray Dining Hall on the campus following the service. Guest's are welcome to join us for this time of reminiscing and sharing memories of our beloved friend. If you can be with us for lunch, we would appreciate knowing of your plans - contact Lea Bennett, 662-512-8430 or lbennett @bmc.edu.

The family of Dr. Johnnie M. Armstrong created this Life Tributes page to make it easy to share your memories.

Send flowers to the Armstrong family.