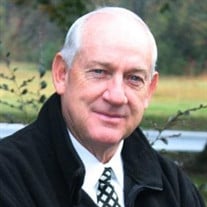 Dennis Craig Grisham, 77, passed away at his home in Dumas, Mississippi on December 8, 2021. Dennis was the strongest, yet most humble man one could ever hope to meet. Dennis was born in Ripley, Mississippi on November 28, 1944, to Leland and Roberta Grisham. He graduated from Ripley High School in 1962. After attending Northeast Mississippi Junior College and University of Southern Mississippi, Dennis served in the Marine Corps, from which he was honorably discharged in 1969. Dennis subsequently moved to Memphis, where he met and married Lynda McAlister, also from Ripley. He immediately became a father of two boys, Billy and Tommy Walter, ages 6 and 4, who from that day forward he always treated as his own children. In 1972, Dennis and Lynda had a little girl named Jill. In 1974, Dennis moved his family back home to Ripley, where he started a small construction company that, through his extremely hard work, later became the successful Grisham Asphalt & Paving Company, Inc. In 1984, Dennis became supervisor for Tippah County’s 4th District, his dream job, which he retained for the next 36 years by winning nine consecutive elections. During that time, Dennis served as the President of the Tippah County Board of Supervisors and President of the Mississippi Association of Supervisors. Dennis loved being a supervisor; his passion for helping others and treating everyone with respect made him extraordinarily good at it. Above all else, Dennis was a strong Christian who was active in Dumas Baptist Church. Dennis was preceded in death by his parents, his brother Jackie and Chester Grisham, his son Jason, and his son-in-law Michael Bennett. He is survived by his wife Lynda; sons Bill Walter (Sondra) and Tommy Walter (Leslie); daughter Jill Bennett; sister Laura Medley (Rusty); brother Kenneth Grisham; grandchildren Colby Walter, Corbin Walter, Ellie Walter, James Walter, Sarah Walter, John Thomas Walter, Nolan Bennett (Journey), Jud Bennett, and Sophie Bennett. Visitation will be held from 5:00 to 7:00 p.m. on December 9, 2021, at McBride Funeral Home in Ripley. On December 10, 2021, visitation will occur from noon until 2:00 p.m. at Dumas Baptist Church, followed by the funeral at 2:00 p.m., also at the church. The grandchildren will serve as pallbearers. Honorary pallbearers will be Danny Jordan, Royce “Hop” Gibens, Jim Owen, and the Tippah County Board of Supervisors.

Dennis Craig Grisham, 77, passed away at his home in Dumas, Mississippi on December 8, 2021. Dennis was the strongest, yet most humble man one could ever hope to meet. Dennis was born in Ripley, Mississippi on November 28, 1944, to Leland and... View Obituary & Service Information

The family of Dennis Craig Grisham created this Life Tributes page to make it easy to share your memories.

Dennis Craig Grisham, 77, passed away at his home in Dumas, Mississippi...

Send flowers to the Grisham family.