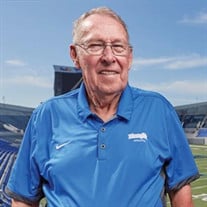 David Randle Butler, the first born of the late Claude and Lavern (Randolph) Butler, was born on February 26, 1939 in Chester County Tennessee. He passed away from lung cancer on February 22, 2021 at his home in Southaven, Mississippi. Visitation will be held from 10:00 A.M. – noon at McBride Funeral Home in Ripley, MS with services to immediately follow at noon on Saturday February 27th. Minister Robert Jefferies will be officiating. There will be a short remembrance for the family with a song and prayer graveside at Chapman Church of Christ following the funeral service. Others who wish to attend are welcomed. Retiring after 42 years at the University of Memphis as the Director of Food Services at the South Hall athletic dormitory, he worked another 15 years part-time focusing on the needs of athletics for all home football games. David was inducted into the M Club Hall of Fame in 2011 and received the True Blue Tradition Award in 2013 for his loyalty to the university. David served in the Tennessee National Guard for a brief stent after high school. His favorite pastimes were The University of Memphis, farming, gardening, hunting, welding and golf. He is survived by his wife of 51 years, Rannie Mauney McGee Butler, two step-daughters, Monica McGee Jackson (late Andy) and Sonya McGee Cooper (James), both of Nesbit, Ms and two step-grandchildren, Rachel Jackson and Bradley Magness, along with three sisters, Patricia Pasqual (Caesar), Joan Conner (late Paul), Sylvia Pruitt and a younger late brother, Jerry Lynn Butler, and 14 nieces and nephews. Pallbearers will be Sam Ables, Aeron Cooper, James Cooper, Bradley Magness, Anthony Pascual, Micheal Pascual. In lieu of flowers, we request donations be made to either of the below Christian funds in remembrance of David R. Butler. GBN.ORG 8900 Germantown Road Olive Branch, Ms 38654 OR Southaven CoC Building Fund Southaven Church of Christ 700 Church Road E, Building #4 P.O. Box 128 Southaven, MS 38671

David Randle Butler, the first born of the late Claude and Lavern (Randolph) Butler, was born on February 26, 1939 in Chester County Tennessee. He passed away from lung cancer on February 22, 2021 at his home in Southaven, Mississippi. Visitation... View Obituary & Service Information

The family of David Randle Butler created this Life Tributes page to make it easy to share your memories.

David Randle Butler, the first born of the late Claude and Lavern...

Send flowers to the Butler family.