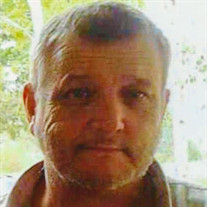 RIPLEY, MS - Charles Douglas Leopard, 60, passed away Tuesday, March 16, 2021, at his home in Ripley, MS. He was born on November 7, 1960, to Lonnie Douglas and Addie Mae Barnes Leopard in Memphis, TN. He was a self-employed Roofer and Construction... View Obituary & Service Information

The family of Charles Douglas Leopard created this Life Tributes page to make it easy to share your memories.

Send flowers to the Leopard family.