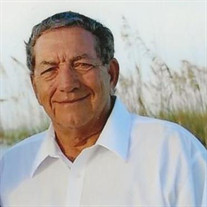 Charles Martin Braddock, Sr. 81, passed away Monday, November 11, 2019, at the Tippah County Hospital in Ripley. He was born on April 26, 1938, to Lee and Mamie Kellum Braddock in Tippah County, MS. He was an United States Army Veteran serving... View Obituary & Service Information

The family of Charles Martin Braddock Sr. created this Life Tributes page to make it easy to share your memories.

Send flowers to the Braddock family.