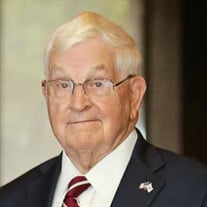 Bobby Paschal Martin, born on February 13, 1933 to Elijah and Valca Hobson Martin, went home to be with the Lord on November 4, 2020. He was a veteran of the United States Army, serving his country during the Korean War. He was the Chairman of the Board of The Peoples Bank, where he also served as CEO & President from 1970 - 2012. He was the beloved husband of Barbara Moore Martin for 64 years, and his family was second only to God in his life. Bobby was preceded in death by his parents and his sisters Georgia Crook, Virginia Coombs, and Peggy Marvin. He is survived by his wife, Barbara: his daughter, Mary Childs: his grandson Bob Glover (Amberly): his great grandchildren, Snow, Graham, and Pierce Glover: and several very special nieces and nephews. Bobby’s lifelong passion for people led him to and through a career in banking. His career at The Peoples Bank brought him great joy by allowing him to faithfully serve the community he loved for over 59 years. He believed in giving back to the industry that had given so much to him, evidenced by his service as Chairman of the Mississippi Bankers Association and the Mississippi Board of Banking Review. Bobby mentored and inspired numerous students, entrepreneurs, employees, and other community, state, and national leaders. He truly viewed his co-workers and employees as members of his own family. Bobby bled maroon and white: an MSU graduate and avid Bulldog sports fan, he served Mississippi State University in many capacities including as Chairman of the MSU Foundation and President of The Bulldog Club. In honor of his many years of service, he was awarded an honorary doctorate from Mississippi State University in 2002. He was also a graduate of the Graduate School of Banking at LSU. A lifelong advocate for education, he served as Chairman of the Blue Mountain College Board of Trustees and on the Board of Trustees for Northeast Mississippi Community College. Bobby had a contagious, driving passion for improving the lives of all the citizens of the State of Mississippi, particularly Northeast Mississippi. He served as Chairman of both the CREATE Foundation and the North Mississippi Medical Center in addition to serving as Chairman of the Yocona Area Council of the Boy Scouts of America. His service on untold boards, committees, and task forces were priceless to his community, but always most important to him were the countless connections and friends he made along the way. Bobby was a member of First Baptist Church, where he has spent many years singing in the choir, serving as a deacon, and as a member of the Faith Sunday School Class. In lieu of flowers, the family requests donations in Bobby’s name to the Tippah County TARGET Endowment Fund (www.createfoundation.com), The MSU Tippah County Scholarship Fund (www.msufoundation.com), or any worthy cause of your choice. The family will have a private celebration of life service on Friday, November 6. If you would like to watch the service, it will be available beginning at 2:00pm via livestream at: www.fbcripley.com/livestream

Bobby Paschal Martin, born on February 13, 1933 to Elijah and Valca Hobson Martin, went home to be with the Lord on November 4, 2020. He was a veteran of the United States Army, serving his country during the Korean War. He was the Chairman... View Obituary & Service Information

The family of Bobby Paschal Martin created this Life Tributes page to make it easy to share your memories.

Send flowers to the Martin family.