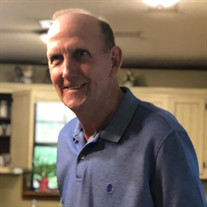 Billy Claude Hughes, age 74, of Chalybeate, MS passed away on November 6, 2020. He was born on May 11, 1946 to Wesley Alexander and Naomi Hudson Hughes in Chalybeate, MS. He was a veteran of the United States Marine Corps and served in the Marine Reserves. Billy co-owned and operated Hughes Brothers Tire and Diesel Service in Walnut, MS for nearly 50 years, and also served as the 1st District Supervisor in Tippah County for 12 years. He was the beloved husband of Kay Swain Hughes for 54 years, and his family was his greatest joy in life. He was a member of Campground Methodist Church and an avid supporter of the Chalybeate and Walnut communities and schools. Billy loved sports and could be found several nights a week in the bleachers at Chalybeate or Walnut watching his kids, grandkids, and their teammates play ball. A man of few words, he always had a smile on his face, a one-liner ready, and a piece of peppermint or butterscotch in his pocket to pass out. He enjoyed fishing and in his later years, riding in his golf cart to feed the catfish with Henlee and his fur-buddies, Lola and Gypsy. He appreciated a well-kept yard and loved to mow his grass and maintain the landscaping. He also loved SEC sports and watching the Paul Finebaum Show from his favorite spot on the couch. In addition to his wife Kay, Mr. Hughes leaves behind two daughters, Lorie Gaillard (James) of Chalybeate, MS, and Kelly Patterson (Todd) of Slayden, MS; and one son, Billy Claude Hughes II of Chalybeate, MS; 9 grandchildren, Gage Strickland (Jenna) of Southside, AL, Lucas Gaillard of Dumas, MS, Ben Gaillard of Ripley, MS, Evan Hughes of Ripley, MS, Sydney Wilbanks of Chalybeate, MS, Carley Hughes of Walnut, MS, Kaylee Patterson of Slayden, MS, Laura Leigh Hughes of Chalybeate, MS, and Henlee Sisco of Slayden, MS; and three sisters, Martha Montgomery of Chalybeate, MS, Katheryn Brown of Walnut, MS, and Betty Hopper (Wayne) of Tiplersville, MS. He was preceded in death by his parents, Wesley and Naomi Hughes; two sisters, Ruth Robinson and Sarah Hurt; three brothers, Sonny Hughes, Jimmy Hughes, and Mike Hughes, and one daughter in law, Lori Shearon Hughes. Visitation will be Monday, November 9th from 5:00pm to 7:00pm, and Tuesday, November 10th at 9:30 am until 11:30 am at McBride Funeral Home in Ripley, MS. The family has chosen a private family funeral service for Billy. Pallbearers will be Byron Wegman, Corey Swain, Justin Swain, Shane Cardwell, Tyler Cardwell, and Ryder Hughes. Honorary Pallbearers are Dennis Grisham, Gary Swain, Phillip Hughes, Jimmy Lee Hughes, Byron Hughes, and Brad Hughes. Condolences for the Hughes family may be sent to www.mcbridefuneralhome.com We ask that all CDC recommendations be followed concerning COVID-19.

Billy Claude Hughes, age 74, of Chalybeate, MS passed away on November 6, 2020. He was born on May 11, 1946 to Wesley Alexander and Naomi Hudson Hughes in Chalybeate, MS. He was a veteran of the United States Marine Corps and served in the Marine... View Obituary & Service Information

The family of Billy Claude Hughes created this Life Tributes page to make it easy to share your memories.

Billy Claude Hughes, age 74, of Chalybeate, MS passed away on...

Send flowers to the Hughes family.