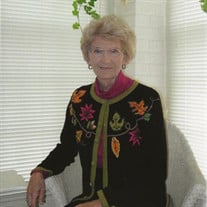 Betty Frances Rutledge Moore, 85, lifelong resident of Tiplersville, passed away peacefully at her home on Sunday evening, March 14, 2021. Born August 8, 1935, to James Henry and Sarah Wade McCoy Rutledge, she often spoke of the work they all did on the family farm--memories of milking cows and picking cotton were especially vivid for her. She was a faithful member of the Tiplersville Church of Christ throughout her life, treasuring her close church friendships. She and her husband, Britt Moore, had been married for 43 years at the time of his death in 1999; they loved Tiplersville, which has been home to several generations of their families. Betty was proud of her education and had worked hard to complete her master’s degree while teaching. She spoke with admiration for teachers she had encountered at every level, especially at Tiplersville Grammar School and Chalybeate High School. After several years working with the Farmers Home Administration and several more caring for her small children, she began teaching in the North Tippah School System, where she spent twenty years as a first grade teacher at Walnut Elementary School. One of her great joys was helping children learn to read. In addition to teaching, Betty had beautiful vegetable and flower gardens. She was also an excellent seamstress, making items for her home and clothes for herself, her children, and grandchildren. She crafted wonderful play costumes for Sam and Zach, and she especially loved making books and activities to enjoy with Perrin. She was a good cook, and made big pans of dressing and beautiful caramel cakes for many holiday dinners, McCoy reunions, and church fellowship meals. She is survived by two daughters: Donna King (Robert) of Nashville, and Sherry Moore of Tiplersville; her twin brother: Bob Rutledge (Jane) of San Antonio, Texas; a brother-in-law: Fred Moore (Margaret) of Tiplersville; two sisters-in-law: Lillie Horton of Tiplersville and Barbara Martin of Ripley; three grandsons: Samuel King (Hannah) of Nashville, Zachary King (Lisa Beck) of Birmingham, and Perrin Moore Coombs of Tiplersville; one great-grandson, Bennett Britt King of Nashville; and many cousins, nieces, and nephews. In later years she received much help and excellent care that allowed her to remain in her home. She was especially grateful to her great-nephew, Davy Horton, and to her caregivers: Freddie Dennis, Catherine Gibbs, Brenda Griggs, and Ameniah Moore. She was preceded in death by her parents, her husband, her brother Craig and his wife, Ginny, and by several much-loved brothers- and sisters-in law from her Moore family.

Betty Frances Rutledge Moore, 85, lifelong resident of Tiplersville, passed away peacefully at her home on Sunday evening, March 14, 2021. Born August 8, 1935, to James Henry and Sarah Wade McCoy Rutledge, she often spoke of the work they all... View Obituary & Service Information

The family of Betty Frances Rutledge Moore created this Life Tributes page to make it easy to share your memories.

Send flowers to the Moore family.