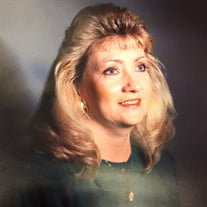 Barbara Kay Newby Carter was born October 8, 1959 to Homer and Virginia Heavener Newby in Tippah County, MS. She worked for BenchCraft as a Factory Worker and was a member of the Church of Christ. Barbara is survived by four daughters: Miranda... View Obituary & Service Information

The family of Barbara Kay Newby Carter created this Life Tributes page to make it easy to share your memories.

Send flowers to the Carter family.