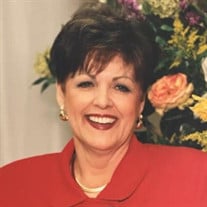 Anita “Gail” Hobson Winter was born October 7, 1947, in Ripley, Mississippi, to James and Johnnie Elizabeth Hale Hobson and passed away May 10, 2022, at Union County Health and Rehabilitation Center. She was raised in the Beech Hill community just across the Benton/Tippah County line and was a lifelong member of the Church of Christ. She was the youngest child and only girl of her two doting parents and handsome and protective older brothers: Jimmy Hale Hobson and Michael “Barry” Hobson. A beauty from a young age, after graduating from Ashland High School, she attended the Mississippi University for Women for one year. Shortly thereafter she met Gwin Winter, who was from Calhoun County and was teaching high school agriculture in Ripley, Mississippi. They married in August of 1967 and welcomed two boys, Michael Todd Winter in June of 1968 and James Ryan Winter in November of 1971. After she and Gwin married, they first lived in Marks, Mississippi, and then made their home in Vardaman, where they were an integral part of the community and raised their two boys. She was a faithful member of South Jackson Church of Christ in Houston, Mississippi, as long as she lived in Vardaman, attending services three times a week. A lifelong homemaker, she was the definition of a true Christian southern lady who excelled in making sweet potato pies and tuna salad. She love her family fiercely and was known for her thoughtfulness toward others. She is survived by her sons: Michael T. Winter (Sidra) of Pontotoc, Ryan Winter (Jenni) of Grenada, Mississippi; granddaughters: Chandler Beth and Allie Grace Winter, both of Tupelo; and her beloved brothers: Jim Hobson (Dee) of Dallas, Texas, and Barry (Brenda “Rose”) of Ripley, Mississippi; a special friend: Dr. Tommy Simpson of Ripley, Mississippi, and Whitney McNutt of Tupelo, Mississippi, who was like a beloved granddaughter to her as well as numerous nieces and nephews. Pallbearers will be Chris Hobson, David Hobson, Matt Hobson, Bobby Russell, Aleck Hobson, Luke Hobson, Raif Hobson, Reed Mitchell, Phillip Allen, Todd Shettles, and Benny Chandler. Officiating will be Minister King McCarver and Tony Farese. Michael Winter will do the Eulogy. Memorials can be given to: St. Jude Children's Research Hospital, 501 St. Jude Place, Memphis, TN 38105.

Anita &#8220;Gail&#8221; Hobson Winter was born October 7, 1947, in Ripley, Mississippi, to James and Johnnie Elizabeth Hale Hobson and passed away May 10, 2022, at Union County Health and Rehabilitation Center. She was raised in the Beech Hill... View Obituary & Service Information

The family of Anita Gail Hobson Winter created this Life Tributes page to make it easy to share your memories.

Send flowers to the Winter family.